How to Pick the Right UV Flashlight?
Free Shipping Worldwide

I’m sure you all have heard something about UV flashlight, but maybe the hearsay stays on that UV could help lighting up posters on the walls or businesses using to protect their enterprises, etc.

However, UV flashlight can be a necessity in various professional scenarios.

As popular as it seems, it actually takes some technical knowledge to handpick the most suitable man for the job.

This article is written to clear some common misunderstandings while also list out the important questions to ask in order to find the most suited UV flashlight for yourself.

So first of all, we need to understand what is UV light.

UV lights are lights that shine from the 10-400nm wavelength. Black lights in particular have a wavelength between 315-400nm, and UV light is mostly invisible to the naked eye because the human eye cannot see below 400nm. 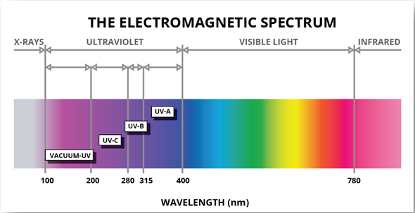 UV light is a type of electromagnetic radiation that can make certain objects fluoresce when hitting on them - a phenomenon similar to a bright glow.

Many objects and substances such as paints, dyes, minerals, animals and body fluids exhibit fluorescence, which means a UV light source could be quite useful to detect the above mentioned materials.

Electromagnetic radiation comes from the sun and transmitted in waves or particles at different wavelengths and frequencies. According to the U.S. Navy's "Ultraviolet Radiation Guide," UV is generally divided into three sub-bands:

Radiations with wavelengths from 10 nm to 180 nm are sometimes referred to as vacuum or extreme UV. These wavelengths are blocked by air, and they only propagate in a vacuum.

So what is a UV flashlight?

A UV flashlight takes the same shape and format as a standard white light flashlight, but instead of emitting white light, it emits ultraviolet light. Virtually all UV flashlights use LED technology.

UV flashlights are light and portable, which make them fit for many field usages. As mentioned above, the common scenarios include but not limited to: 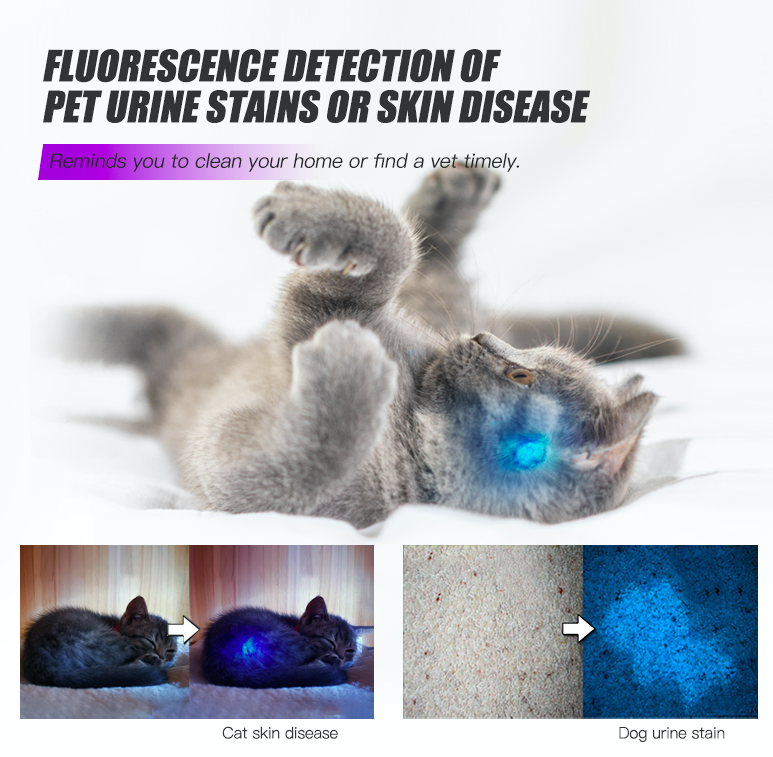 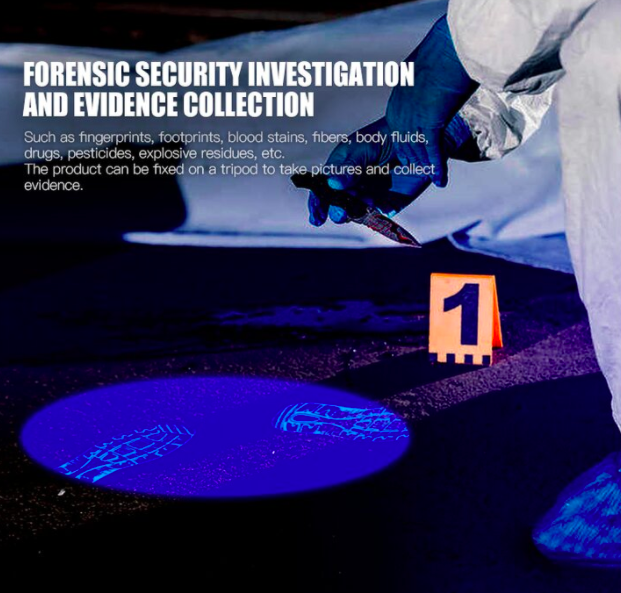 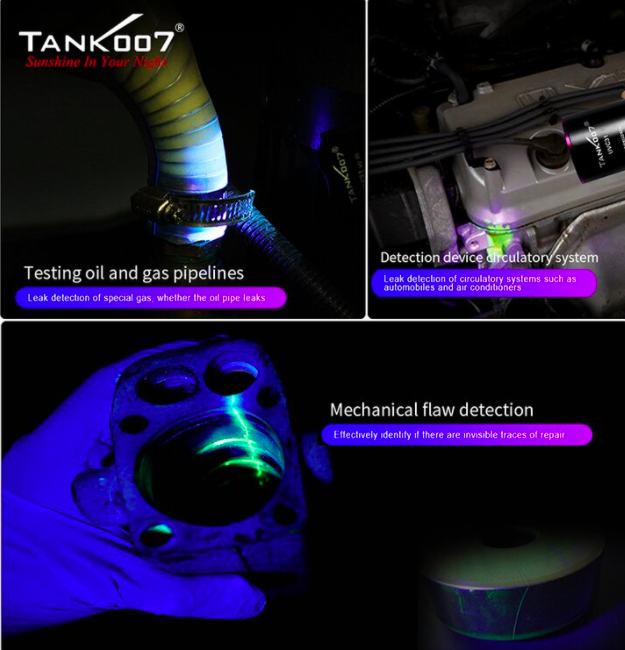 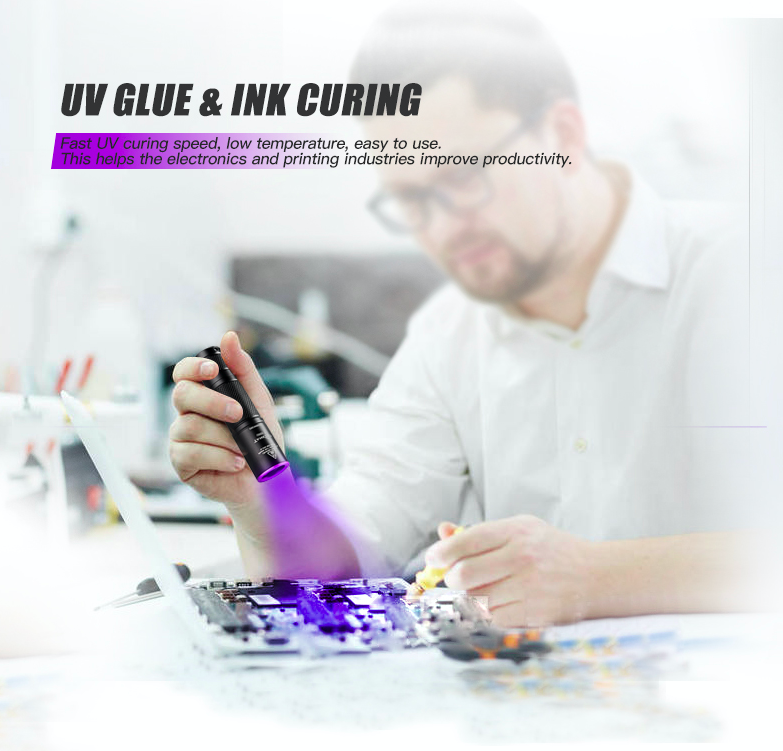 Because UV flashlights vary in types and qualities, it can be difficult to know if, and which UV flashlights will work for your particular use case without looking at the specifications.

We have for example 18 different types of UV flashlights in the store. Would you be able to handpick your type of flashlight with the help of the categorization and parameters?

Don’t worry if you cannot yet. Make sure to ask the following three important questions before you hit the checkout button.

What is a right wavelength?

UV light is described along a spectrum using its wavelength, measured in nanometers (nm). When looking for any UV flashlight, it is extremely important to know what wavelength (in nanometers, or nm) the light should be emitting at.

Why is the wavelength so important? Well, because a UV light needs to induce fluorescence. Not all UV wavelengths are capable of producing sufficient fluorescence effects, don’t pick wavelength blindly.

Although optimal wavelengths can vary across materials and objects, most fluorescence is strongest in the wavelengths around 360 nm. Therefore, it is important to pick a UV flashlight with a wavelength at or near 365 nm, otherwise, the flashlight could not even properly identity the fluorescent substances.

If a seller or manufacturer does not list the wavelength used – you should be alerted that they could be using an alternative purple light source and therefore avoiding the detailed parameters intentionally.

A common pitfall to watch out for is the wavelength of 395 nm. Strictly speaking, these are considered to be ultraviolet LEDs when the definition is any light < 400 nm is UV. But because these LEDs are so close to 400 nm that they still emit much of the violet light, which cannot provide sufficient power to induce fluorescence.

Does it provide enough power?

How do you know the quantity of UV light being emitted? Unfortunately, unlike white flashlights that use the lumens metric to describe brightness, UV light is invisible and cannot be described as such.

Generally, two parameters of a UV flashlight's will indicate how much UV light it can pump out.

The first is the power consumption, usually rated in watts. Most smaller flashlights will run at 1W or so, while larger flashlights may run at 3W or more.

Don't be fooled by the LED quantity - just because there are more LEDs does not necessarily mean that there is more power. What matters is the total power - 1 LED running at 3 watts is more powerful than 3 LEDs running at 0.5 watts each.

The second aspect is LED efficiency. Not all LEDs convert the same ratio of electrical energy to UV light energy, and this can play an important role in determining the amount of UV light energy is ultimately emitted.

How is it powered?

Many UV flashlights can be powered via disposable AA or AAA batteries. This is the most practical approach for light uses. What if you expect more rigorous or extended use? You may want to consider a rechargeable option.

The most common battery type is called the 18650, a rechargeable lithium ion battery. 18650 batteries can hold up to 2500 mAh (at 3.6V) or more, which is equivalent to approximately 3-4 of the disposable AA battery type.

We have the rechargeable UV flashlight of UVC31 as well as UV-L03C both adopting 18650 rechargeable battery and a USB Type-C cable, perfect for longer hours of working in NDT testing, forensic scenes, industrial leak detection and curing fields.

So is It Safe?

UV light does have a reputation for being potentially harmful, damaging DNA and causing cancer. Indeed, there is legitimate reason for you to worry, but not too much. We will elaborate as below.

We receive significant amounts of UV-A (315-400 nm) and UV-B (280-315 nm) from the sun. UV-B wavelengths are shorter, and are therefore more harmful.  Most of the risks associated with excessive exposure to sunlight (sunburn, eye irritation and cancers) are a result of UV-B wavelengths. Because UV flashlights emitting at wavelengths 365 nm or higher are emitting in the UV-A range, they can be thought of as being less harmful than the UV-B wavelengths.

Generally speaking, the overall amount of UV light emitted from a UV flashlight is also much less than what you would find outdoors on a sunny day. Natural sunshine has about 32 watts of UV energy per square meter, which is more than 30 times the amount of UV energy emitted by a 3W UV flashlight (assuming a 30% efficiency value).

Be sure to keep the UV flashlight away from children or anyone who is not aware that the flashlight emits UV light.

If you are still a bit uncomfortable about the safety aspects, you can take further steps to protect yourself. For example, you may want to purchase UV-blocking safety goggles or sunglasses, try to avoid shining the light directly onto bare skin, and wear long-sleeve clothes.

Last but not least, make sure the UV flashlight is turned off when it’s not in use.